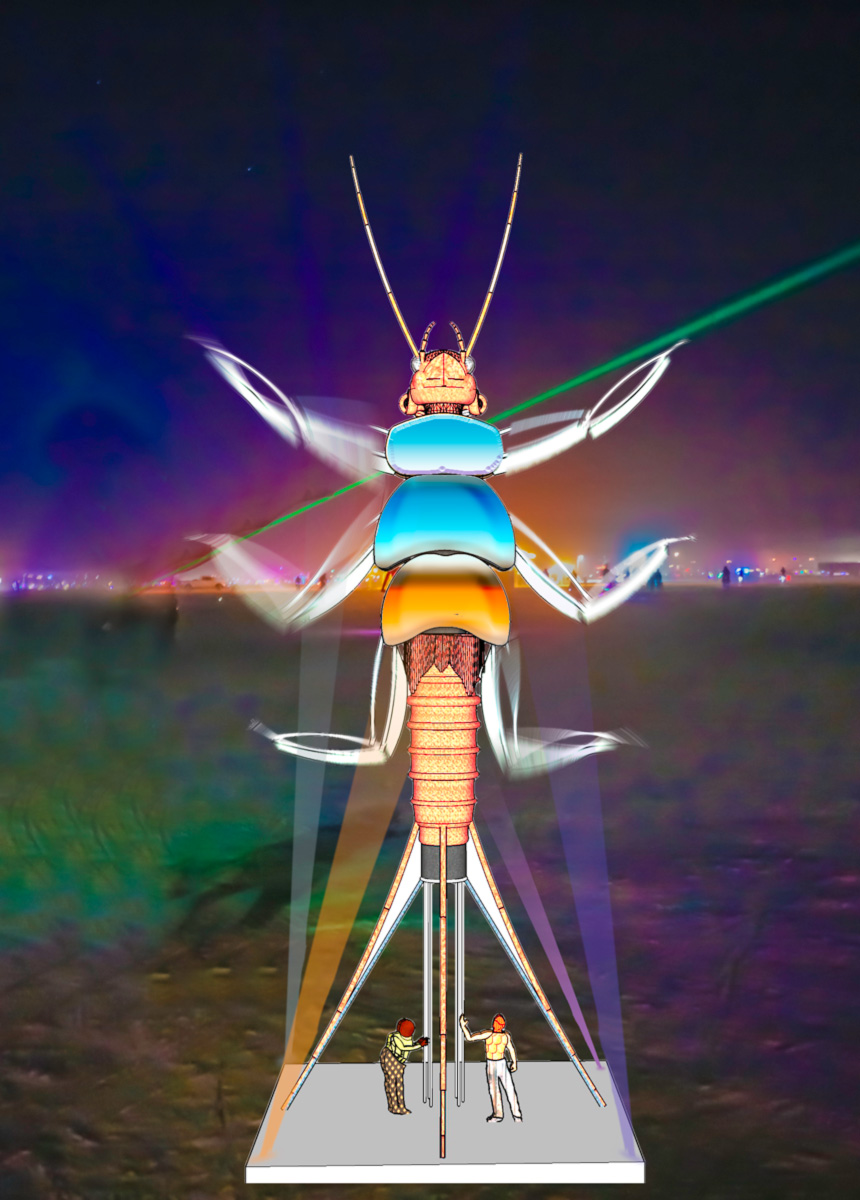 The Importance of Small Things: Plecoptera

We are grateful and honored to have an opportunity to create non-commodified art at this time of continued dificulty, as we emerge from the pandemic.

We are currently raising funds for the creation of this interactive, kinetic and musical artwork. We are hoping to present it to the public for the first time in Black Rock City 2021, and following that in Seattle, Vashon and beyond. Originally planned for 2020, we lost much of our promised funding last year due to public funds being reallocated for the pandemic. Our largest single funder, Burning Man Arts, is making the 2020 honorarium funds available for 2021. We are seeking to make up for our lost funding. Your donation will go towards the creation of the artwork and It's subsequant appearances.

Support us fiscally in three ways:

3. Donate to our Kickstarter Campaign:

We plan to launch the crowd funding aspect in early June. The link will be available on this page when it goes live.

"Plecoptera" is an interactive, kinetic, and musical sculpture, stage, gathering point, a way to think about the importance of small things in the diversity of an ecosystem. This project includes the design, engineering, fabrication, transportation, and installation of the large scale sculpture at at least one site in 2021. Lelavision's Leah Mann will curate and direct live performances by a diverse cast of dancers, musicians, spoken word artists, and improvisers exploring the relevent themes: the importance of environmental justice, social justice, and racial justice. Lelavision's Ela Lamblin will design and fabricate the artwork.

1992 – Internship, through the Atlanta College of Art, Atlanta, GA, with artist Scott Gilliam to construct and install Gilliam's "She Wolf" at PS-1, New York, NY.

1997-present—Lelavision: performer, creative director, and co-founder. Inventor and fabricator of musical sculptures for this internationally known performing, touring, and teaching company combining kinetic musical-sculpture and performance. Co-creator of a repertoire of eleven shows centered around the sculptures.

1993-1999 —Musician and musical instrument inventor for UMO Ensemble, a Lacoq-based physical theater company. Collaborated on music and set design and toured the US with the six-member troupe.

2010—Artist in Residence, to invent and build a glass musical instrument. Museum of Glass. Tacoma, WA.

2015— "Magnificenterra." A stainless steel public sculpture commissioned by St Thomas School, Medina, WA. A kinetic and musical sculpture of the globe and atmosphere.

"Chemical Origins of Life." With Dr. David Lynn, Professor of Chemistry and Biology, Emory University. Presented at the American Association for the Advancement of Science annual meeting, Washington, DC.

"Above the Genome." A performance video featuring Dr. Arri Eisen, Professor of Biology, Emory University, and the musical sculpture Epitone. At the Museum of Glass, Tacoma, WA.

2002 – "Children of the Tide." Sound score for this film on microscopic sea life by David Brugman. University of WA and Friday Harbor Laboratories. Washington.

2010— Designer of private residence in Applegate, OR.

2001-present— International touring with Lelavision. Co-director, composer, kinetic-musical sculpture designer/fabricator, and performer for Physical Music performances at 11 International Festivals in 6 countries and in other festivals and venues in major cities around the world, in the US, Canada, Cambodia, Thailand, Italy, et al.