Above the Genome Performance

Arri teaches, writes, and does research in science, science education, bioethics, and science and religion.  He established the Emory College Program in Science & Society which has provided ongoing support for Lelavision's art/science collaborations.

Arri provided the scientific material and text for Lelavision's "Above the Genome: the Epigenetic Bulb", an Installation/performance project that premiered at the Museum of Glass, Tacoma, Wa 2010. The above instrument (now known as the "Shrimp PLatter") was created initially as part of this project through a residency with the Museum's Visiting Artist Program.

In addition, Arri has been involved as a supporter and collaborator with all of Lelavision's forrays into science and art including:

The Anther my Friend

The Accumulation of Change 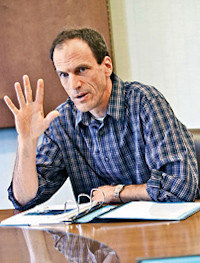